Whats going on my gerbils Big Doves is fresh off the flight (or flights for that matter)from the Bay area.Here is a lil recap of my adventure to the west that was filled with paint,punani and the "Tenderlion" aka the "Lion" yikes! 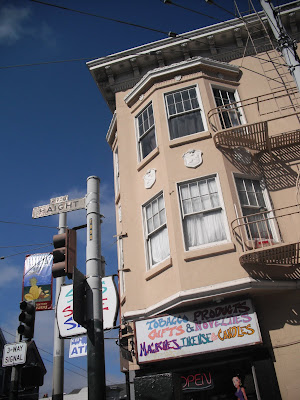 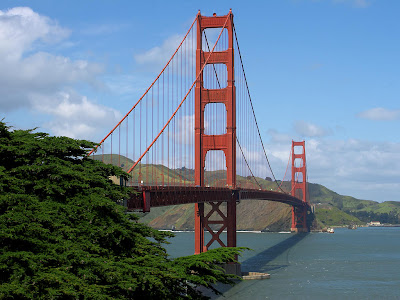 The bay area is one cool ass place,I stayed in downtown Oakland in which I encountered more weirdos,winos and crackheads than a little bit.First thing I noticed was that there were no 24 bodega spots as NYC has(grrrr).Very frustrating after walking 10 to 15 blocks in each direction! Until I stumbled upon a chicken and waffle house at Jack London Square(angels singing!).This place saved my life for the week I was there.Plus freight trains ran thur twenty feet from the door way which was odd.Freight trains with graffiti + Good food and I was good to go! 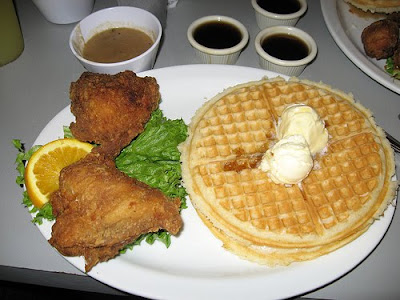 Next couple of days were cool.I had my home girl Maia who's from my block drive me out there everywhere.She even took me to her ALL GIRLS College called MILLS that she attends,that's shit was like heaven.Except for the mean mugging butch dikes who aren't
fond of penis roaming there campus!

I visited Haight street (upper and lower)hit some spots(stussy,clubs etc).I got offered endless amounts of weed and every white person over 40 that I talked to at some point lived in the Lower East Side in the 60's and 70's.They all bragged of good times on Ave A.(I bet,but can they really remember? ha) 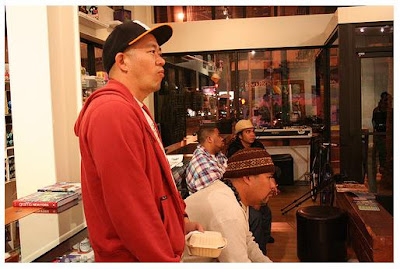 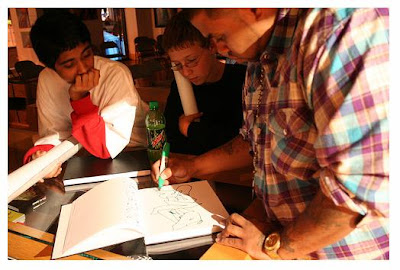 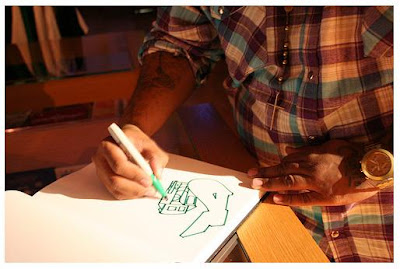 But the one hood I couldn't get over was the area in San Fran known as "The Tenderloin".Yo Im not even kidding you that shit was bad!!!Crackheads,8 foot Trannys,Pimps,HOs and an endless amount of Thug Mug Slugz.That shit had me gripping on my box cutter faster than the Taliban on a American Airline!In the great words of Dave Chapelle "there wasnt nothing "Tender" bout that shit"! 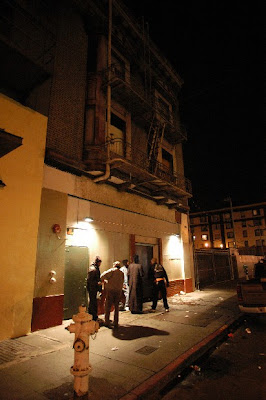 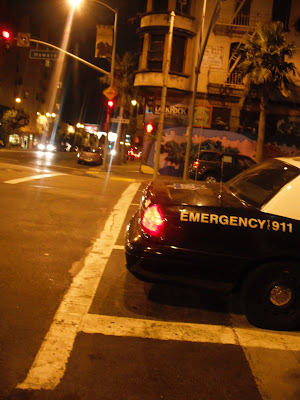 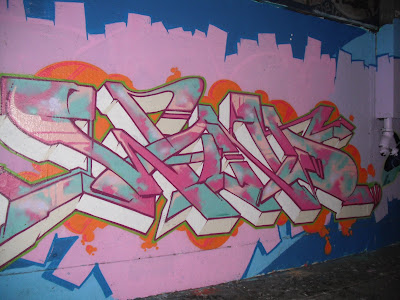 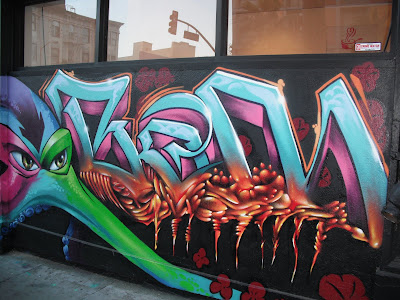 A day before the battle Mike "BAM" got us a wall in the Mission District.En route to
the wall I had a chance to visit the Montana paint warehouse which turned out to be like a little reuinon of some sorts.I bumped into VULCAN which I use to see every other morning on the 6 train on my way to Art & Design,The homie DIET was there along with Bay area Writer APEX,NEON along with JASE who was also a cool fellow.I finally get to the wall which Mike got thur another bay area og TWICK.It was dope rocking with him and his lil man who I forgot his name and CKAWEEKS from Hawaii.The infamous DUG ONE came thur for a second and showed some love,good times. 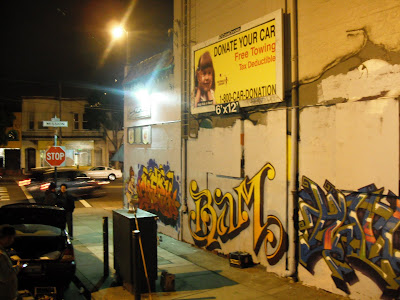 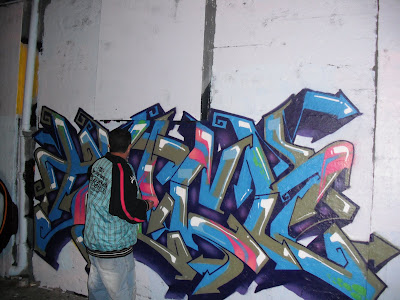 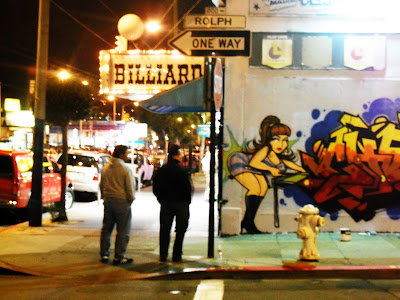 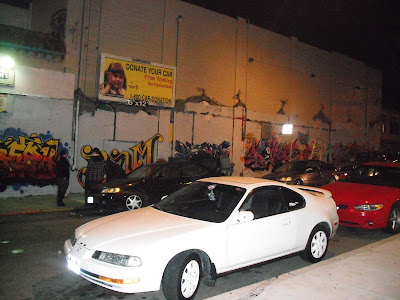 Next day was the battle and I was hyped on getting ready to rock.I got there around 11:30 mad kids running around.Alot of b-boys getting ready to rock for there battle.I bumped into Smerk of Rock Steady Crew who I knew from my b-boys days with Breaks Kru.Alot of familiar faces around,Me and brother PRIME from hawaii kicked it for a little bit and it was on.I signed mad books did interviews and painted some skateboards for some kids.It was a real family event,dope vibe dope people nothing bad to say it was a good event thrown by Estria and his crew,VOGUE TDK from oakland ended up winning the battle,I almost got choked up when he dedicated his winning to fallen TDK member DREAM who was also a FC brother 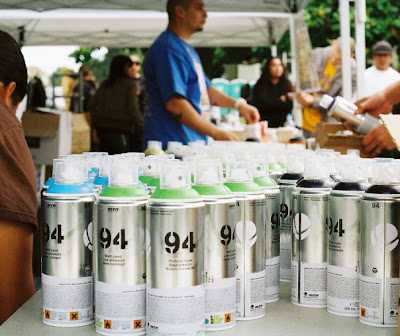 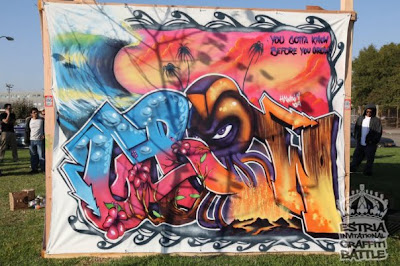 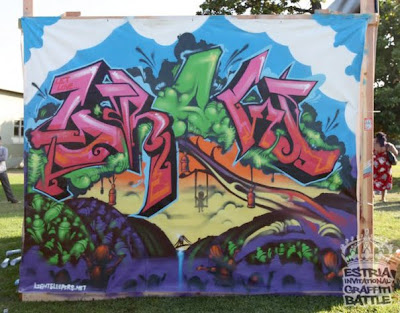 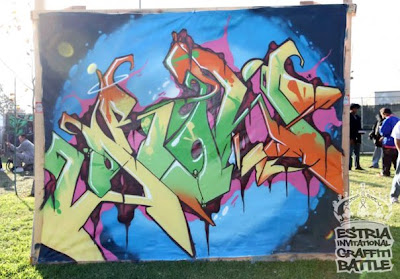 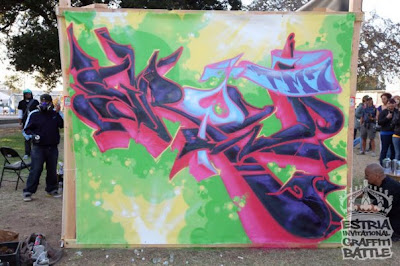 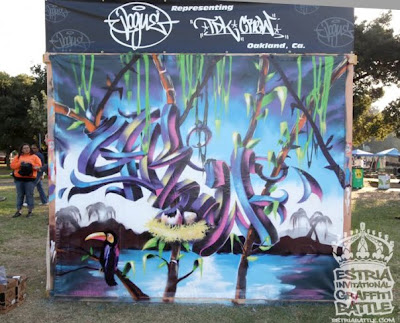 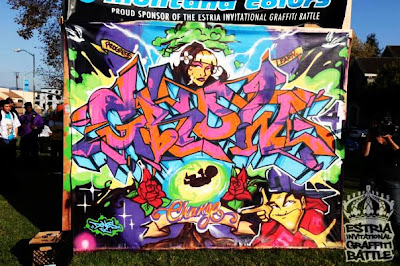 Overall I had a great time in the Bay area.Connected with great people I got some new hawaiian homies (I will visit soon).I wanna give a BIG shout out to Estria for putting this event together and giving me an opportunity of a lifetime and Mike Bam for being there when I needed something at the drop of a dime.You two are real stand up guys,thanks you. 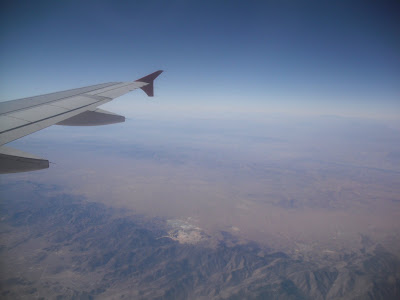 Until next time,next flight back to NY and Im on to the next one....
Posted by BIG DOVES at 2:27 PM